So, it’s been about six weeks now since linux.conf.au 2016 Geelong – LCA By the Bay concluded, and after a lot of sleep and catching up, it’s about time to pen some thoughts about the process, the experience and learnings.

Getting linux.conf.au to Geelong

When you think ‘epicentre of opensource’, Geelong is not what comes to mind. Well, it’s not what used to come to mind! So, how did we bring linux.conf.au to Geelong?

Firstly, we needed some core people to put a bid together. David Bell and I had worked on BarCampGeelong before, and had semi-seriously considered bidding previously. We felt that we had a complementary set of skills, and the drive, leadership and passion to make it happen.

linux.conf.au is chosen by a committee of trusted senior members of Linux Australia, the organisation that umbrellas linux.conf.au and a stable of other events, such as PyconAU, Open Source Developers Conference and a number of WordCamp and Drupal events in Australia. Linux Australia calls for expressions of interest from teams interested in running linux.conf.au every year – bids – and forms a small committee to evaluate the submissions. This normally involves travelling to the bid city, and assessing elements such as;

Terry and the Business Events team were amazing at hosting the bid team, and showcased a number of Geelong’s leisure and recreation offerings, cementing the quality of our bid. It was a great opportunity to learn from the bid team, as they assessed our risk management, our planning and our ability to pull together such a large event.

Although Auckland were awarded linux.conf.au for the year ahead (2015), the decision was made to award Geelong linux.conf.au 2 years out. This was an excellent decision, and provided long term stability not only to the event, but also provided the conference team with a longer term planning horizon.

Woo! We won a bid for linux.conf.au! Now what?!

Once we had a strong idea of how the main conference venue (Deakin University’s Waterfront Campus) would work, we focussed our efforts on preparing to showcase Geelong as an outstanding venue at linux.conf.au 2015 in Auckland. Often, the next year’s conference prepares promotional material or flyers to help encourage conference attendees. We had decided on our conference theme of

life is better with linux

and in keeping with the theme, worked with Martin Print to have NFC keyrings printed.

Did you like the #NFC tags from @MartinPrint? We did too! Show us your hacks! #lca2016 pic.twitter.com/R4WsASuIRM — linux.conf.au (@linuxconfau) February 9, 2015

Now the hard work began. Firstly, we needed to ensure that our conference management system was functional. linux.conf.au traditionally runs on a piece of software called ZooKeepr, and it needs a bit of maintenance each year. Luckily, we had Josh Stewart and James Iseppi to give us a bit of a hand, and with David Bell being generally awesome with anything technical, in no time we were able to get ZooKeepr ready for the Call for Papers.

The Call for Papers (#CfP) happens about 6 months before the conference, and the challenging part for conference organisers is ensuring not only that there are a large volume of submissions, but that the quality of submissions is of a quality fit for an internationally renowned conference. One of the ways in which the conference spreads the word about #CfP far and wide is to reach out to all past Speakers of linux.conf.au and encourage them to make submissions. We also lean heavily on the Papers Committee, the group of senior and respected Linux Australia members who review the #CfP submissions and make recommendations to the conference team on which submissions should be accepted into the conference.

This year, the conference team decided to add another type of submission to the mix – Prototypes – alongside the standard 45-minute Presentation and 110-minute Tutorial. This worked out wonderfully and some of the most popular talks of the whole conference were submitted as Prototypes – including the crowd-favourite Linux-powered microwave by David Tulloh.

Thanks to the efforts of Papers Committee and past Speakers, we received almost 300 submissions, and the overall quality was excellent. The Papers Committee spent a day in Sydney in in August making some very tough decisions, and after around 10 hours we had our Schedule! I was incredibly impressed by the talent in the room, and the generosity of the Papers Committee to give up their time – and in many cases their own coin – to travel and attend.

While I was busy liaising with Speakers and getting travel organised, and David was busy with event venues for our conference events, Sae Ra Germaine was being a superstar with our schwag. She found an excellent supplier for our conference bags, Ecosilk, and designed a contemporary yet simple t-shirt for our delegates (navy) and volunteers (orange). She also worked to ensure that we had sunscreen  and hand sanitiser as part of the Schwag bag.

David took a strong leadership role in Sponsorship, and developed a Sponsorship Prospectus, and negotiated sponsorship agreements with all of our fabulous sponsors. Many of our Sponsors support linux.conf.au year after year – without them, the conference wouldn’t happen. One of the challenges the conference has is having to re-establish sponsor relationships year after year, and our Ghosts debrief session and good documentation helps to ensure continuity.

Deakin University’s Waterfront Campus and Costa Hall are beautiful architecturally, and provide a wonderful environment for collaboration and learning. However, the campus cannot hold 600 conference delegates in a 5 stream conference easily. So, we worked with the National Wool Museum, located a block away from Deakin, who had a conference room available. Another benefit of this arrangement was that delegates were able to see the jacquard loom – programmed via punch cards that the Museum had in their collection.

We worked with Waterfront Kitchen to arrange lunch options for delegates, and arranged to have menus placed in the Schwag bag. WFK also handled all catering for the conference, including morning and afternoon teas. We also made the decision to have core team and volunteer lunches fully catered, so that we could free up time during the busy conference period, and this proved to be a wise choice. We received nothing but positive feedback from our delegates regarding WFK’s catering – the variety, the attention to detail and handling of special dietary requirements.

By November, organisation of event venues was in full swing. linux.conf.au has three traditional conference events – Speakers Dinner, Professional Delegates’ Network Session (PDNS) and the main conference dinner, the Penguin Dinner. Speakers Dinner was held at the fabulous Balmoral at Fyansford, with the Limoncello String Quartet for music.

PDNS was held at the fabulous Little Creatures Brewery, and it was perfect. Great beer, great food and great company. It was amazing to see over 300 people of linux and opensource having a great night out.

Our Penguin Dinner was at the fabulous The Pier restaurant, and was an amazing night out for all concerned.

I was at the meaning of life table for Penguin dinner. #lca2016. Great evening! pic.twitter.com/nW7rFaOR4H

A great conference needs great AV and networking, and we were fortunate to have some wonderful people, including Andrew and Steven working with us. The networking crew laid over 200m of fibre optic to the Wool Museum so that they could have solid internet, and we utilised the services of AARnet for our on-campus networking. Deakin University also provided phenomenal support, working with AARNet to provide strong wireless across the conference venues.

There were so many different parts of linux.conf.au that had to come together to make it an excellent conference, and the entire team needs to take credit for that. Aaron, who co-ordinated our childcare arrangements, which was greatly appreciated by attendees, Brittany whose excellent accountancy skills kept us very well budgeted, Michael whose social media prowess ensured we trended nationally, George who provided a helping hand where it was needed, Erin who was our Rego super-hero, Josh who helped us keep ZooKeepr and our payment gateway under control, Daniel our stellar volunteer co-ordinator and Brett whose photographic talents and video production blew us away – every single person was part of an amazing, productive, motivated and awesome team that I was so incredibly proud to be a part of. 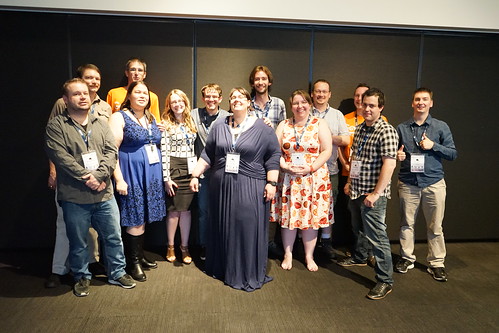