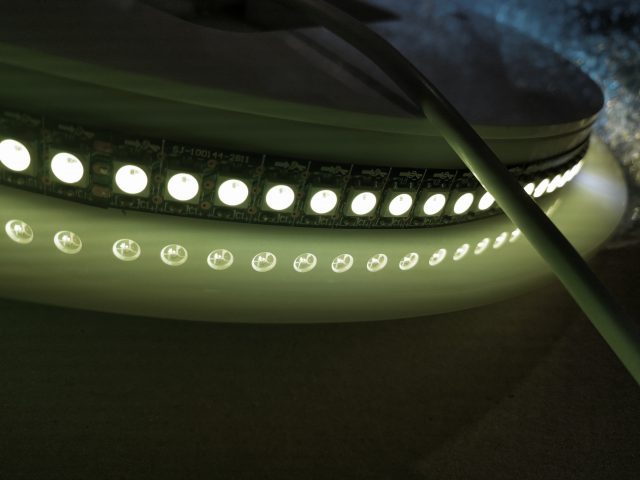 My Light Clock arrived on Friday, and the weekend was a great opportunity to set it up and learn more about how it worked.

The box was very plain and simple, and the device itself was packed with polystyrene peanuts and bubble wrap – very secure nonetheless. The Australian adaptor was included in the box, however the lead on the device was only about 1.5m long. The Light Clock sticker on the back of the device was a nice touch, however I would have liked a Light Clock sticker separate in the box for say laptop stickering. Being one of the first 200 people to receive a Light Clock device, a ‘Kickstarter Edition’ engraving or similar would have been a welcomed addition, but understandably not part of minimum viable shippable product.

First steps with #thelightclock, a @kickstarter project I backed.

The short lead presented the first design and installation challenge; ostensibly this device is aimed at replacing existing analogue clocks that are wall-mounted. However, it’s rare that someone would have a general power outlet (GPO) high up on their wall, necessitating a fairly long lead run to a ground-level GPO. This may not be the case in say corporate offices, which may already have networked clocks in place, or existing infrastructure for digital signage.

Connecting to the network

The next challenge was connecting to the Light Clock, and getting it on to my home wi-fi network, so that it could use NTP to keep in sync. The Light Clock correctly appeared as an advertised SSID in my Network Manager, however every attempted connection to this SSID failed. Rather than spend the time diagnosing it, I used my Nexus 5X mobile phone, running stock Android, to connect to The Light Clock SSID. This was successful on the first attempt, and I was able to join The Light Clock to my home wifi network. As expected, The Light Clock could not see my 5GHz SSID, and could only see my 2.4GHz SSID. This appears to be pretty normal for most IoT devices at the moment, but I suspect we’ll see more support for the 5GHz frequency over time. The service that joined The Light Clock wasn’t responsively designed, so it was a bit tricky on a mobile device.

Once I got the device on the network, I then went back to try and diagnose why I couldn’t connect to The Light Clock SSID via Ubuntu, and found something very interesting. The MAC address picked up by the router, shown in the image below, was;

however, the MAC address picked up in dmesg (the Ubuntu Network Manager log) was

So, I think there may be an issue with the MAC address it’s broadcasting, or how my machine was picking up the MAC address. Here’s a link to the dmesg logs in case anyone is curious. For the record, I’m using an Atheros network card in my ASUS N76. It’s otherwise generally pretty reliable.

Configuring The Light Clock proved much easier than getting the device on the network. You simply connect to a web interface to the device over your WiFi network and adjust the settings.

Another observation was that clear setup instructions were at thelightclock.com/setup.

Experimenting with colours yielded some interesting conclusions. The colour settings tended to work best when both colours – the hours colour and the minutes colour – were heavily saturated and bright. Neon type colours – bright pinks, yellows, blues and greens – tended to work best in terms of contrast between hours and minutes. For someone whose house is pretty much all neutral shades – stones, earthy colours – finding a colour palette that was both clearly readable but resonant with the rest of the interior design was very challenging, and I couldn’t settle on a palette that met both requirements.

The blending option when set high tended to make the time much more difficult to read, and I settled on the lowest blending setting. The other feature that would be useful here would be the ability to adjust the brightness of the hours colour setting and minutes colour setting independently, so for instance you could have a very bright hours setting and a very dull minutes setting. I’m not sure if this is possible with the Neopixel hardware though. I did have a look at the source code to see if it was an easy pull request to do, but I couldn’t figure out how the brightness value is added to the pixel colours.

The settings also had three slots to save different colour schemes, which is a useful UX addition, however I would have liked to have seen more slots. In experimenting with the hour markers, I found that no hour markers at all actually made the time more readable, which was counter-intuitive.

With a little tweaking, I think this device could be integrated into other design projects, such as on canvas or with something like LilyTwinkle.

Integration with other IoT devices

One of the key drawbacks of The Light Clock is that it doesn’t appear to have any integration with other IoT devices, such as LIFX, Hue, Nest and so on. There are a number of use cases I can see for The Light Clock to have a lot of additional value if integrated such as;

I was also half expecting some sort of documented API for The Light Clock so that I could experiment with some integration myself, and although the source code is available, the device itself doesn’t appear to have a documented API or web service. From what I can tell, the settings page basically takes a bunch of GET variables and writes them to the board, so even knowing the range of GET vars would help to be able to integrate The Light Clock with other devices.

This is a great product for people passionate about open hardware, and who like to tinker, but it’s not yet mature enough for a mainstream product. With some small design tweaks and attention to detail in the codebase, it would be a strong standalone product, however it’s key value lies in integrating with other IoT devices to provide meaningful and valuable interactions.

I’m not sure what I’ll do with my Light Clock – I don’t have a wall mounted GPO or GPO in range where I could mount one, unless I find a longer-lead adaptor.

List of feedback for next iteration of this product

Update: trying to mount it to the wall

So, I gave mounting it to the wall a go. This was a nightmare. The two circular openings to hang The Light Clock with are flush to the back of the clock, meaning that I couldn’t mount it with cuphooks  as the hooks were too curved to snag into the openings. I also tried with the Command re-usable big hooks, and tried to assemble them so I stuck them in the openings first, then tried to stick the entire lot to the wall, with no success. Definitely frustrating. Even if I had got it to mount on the wall, I would have still had a cord trailing down the wall, and the 1.5m power cord is still insufficient to reach the GPO.

Was anyone else able to mount this successfully? How did you do it?